Oh I am just the printing fool today!  A good portion of the business I work for relies on a super fly high-tech it to the max printing contraption with more moving parts than a ferris wheel.  Today was the day I had to figure out all those said moving parts.  I had placed a call in to the service department and then went back to messing with the settings.  Lo and behold the answer was right infront of me.  This contraption has something called a PCU. Photo Conductor Unit.  I'm not quite sure what it does but my graphics are back in stellar condition.  My co-worker called me a genius.  But so did some co-workers years ago who were greatly impressed when I displayed my technical prowess when turning the power off and then on again. Viola!  I've heard it been said that genius breeds insanity.  I'd prefer the former but the latter is probably more fitting.  Boy was the tech impressed when he called back to schedule a service appointment.  Well, most likely not. 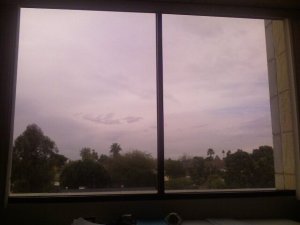 The picture to the left is my office window.  This picture does it no justice.  I live in Phoenix, the land of perpetual summer and sun (today being the exception).  I'm happy when I get to do some paperwork in front of that window.  Solar energy isn't just good for the atmosphere and the deteriorating ozone layer.

My husband was up early today to go to an orientation at a job center.  I noticed upon leaving that he was dressed in jeans with a hole in them.  I asked him if he was really planning on going in ripped jeans.  He said, yeah, this is the style now.  I responded that we are both almost 42.  We don't have a style.  He promised to change before leaving.  This is the first time he has ever been jobless in his entire life.  He has worked construction all these years and doesn't know anything else.  What sometimes seems so obvious to me working in the corporate world wouldn't even cross his mind.

I saw Mr. Cantankerous again today.  Just 15 minutes in that man's presence puts me in instant need of a nap.  No amount of caffeine is going to help that.  He's just that draining.

This past week I received an email from a girlfriend of mine that I have known for years.  She and her family are moving here.  I am very excited to have another girlfriend here.  She had visited about a year ago and said at that time that she was seriously considering moving here.  I have heard this from pretty much everyone that visits.  It is paradise here.  It is one of the most beautiful places in the world.  Then everyone goes home, gets back into their routine and all is forgotten.  I think though that she is serious.  She asked me recently to send her some links on some schools for her son.  She arrives next Friday for get the lay of the land and I cannot wait!  It will be great to have another girlfriend here.  The men in my life are wearing me out –and for all the wrong reasons!  😛