This museum came into existence 16 years ago when urban development threatened an area known for their many ancient petroglyphs.  A committee was formed and the area with these ancient symbols, was turned into a museum.

Here are the photos from our weekend trip:

This rock depicts many animal forms.  On the bottom right of the rock are two deer nose to nose.  A park attendant thought that this may have depicted a deer on one side and his reflection on the other given the close proximity of a now dry river bed.

There were many interesting symbols and shapes.  This one looks like a caterpillar or centipede.  Or maybe it is supposed to represent something more spiritual?  The pictures here are only a few compared to what we were able to see.  They were located on top of a hill.  Although I tried my best to zoom in, the symbols aren't discernible.  They appear to just be a pile of rocks.  However, some of the symbols included what looked like the stick figure of a man with antennae and also another human-like form with lines drawn in that looked like a rib cage. 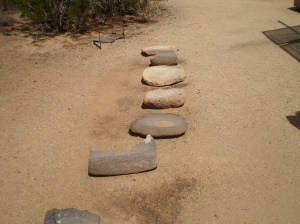 Manos and metates used to grind mesquite beans into flour.

Could the wavy lines on this rock symbolize water?  These are estimated to be between 1,000 and 1,500 years old.  They tell a story.  Maybe someday we'll know what it is.

This museum is located in N. Phoenix.  Here is the web address for anyone interested: http://dvrac.asu.edu/.  If you have AAA there is a discount to get in.