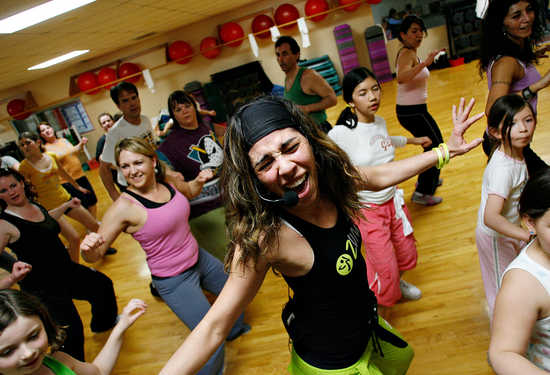 Monday night I took myself by the ear and headed over to the gym that just opened a few months ago in our town.  It was amazing to see so many people working out.  I do realize that these are most likely the New Years Resolutioners but rather than be annoyed at the crowd I thought how cool it was that these folks were actually out taking care of themselves.

My little Phoenix suburb has grown so much in 8 years.  We had to travel into Phoenix to get groceries and all the roads were 2 laned with stop signs at each intersection.  It was somewhat culture shock for this former city slicker.

Anyways, back to the lecture at hand.  It had been an extremely long time since I’ve done any type of dance.  There have been infomercials on Zumba the past month or so where hard bodied individuals rocked out to the Latin beat while beaming about all the weight they’ve lost.

I was glad to have arrived early as there were probably close to 100 in attendance. No one looked like the people in the infomercial.  Not even the instructor.  There was no exotic well endowed beauty in a Brazilian flag sports bra.  Just regular Joes and Joannes who’ve sloughed off their work clothes in lieu of baggy workout attire.

Next to me was a lady in her late 50s, early 60s or so.  She looked more like my friend’s Mom than my friend’s Mom.  We glanced at each other and laughed as we realized we were dressed identically in blue t-shirts and black running pants.  The music started and we dove right into a routine that required a bit of fancy footwork which wasn’t too hard.  I was glad to have gotten there early and ended up in the front row because the back rows seem to be a few seconds behind.

There seem to be such a camaraderie between us Joannes.  I did notice one of the 20-something Joes doing push ups on the parquet floor before class. Not sure what was up with that but when the Joannes outnumber the Joes the Joes have to at least do something to make sure the Joannes are watching.  I can tell I’m getting older.  Oh yes.  Most of us 35 and over were probably wondering why the Joe in question was posturing like this while the younger Joannes were oggling him and his contracting muscles.

While we samba’d, merengue’d and salsa’d ourselves through the hour I happen to catch a glimpse of the lady in the matching outfit.  She was in mid-spin with her arms turned to the left.  When she noticed me watching she announced to me over the music that she was pretending to be dancing with her husband.  This just cracked me up.   In this class it is nearly impossible to get the smile off your face.  Being from a city in the Northeast I still at times am not used to folks being so friendly here.  There is an instant of distrust which seems to be automatic in me and I hate that.  Before my wedding a few years ago my sister and I were at a grocery store.  Everyone says good morning and a few people I had casually gotten to know from frequent visits.   My sister commented that I really knew a lot of people.  She was surprised to hear that I didn’t know any of them.  This is just Arizona.

Class ended and although out of breath I was happy that my under clothing had stayed put and I wasn’t tip-toeing out of there with a wedgie or something.  Always a plus in my book.  The mirrors surrounding us were completely fogged up and everyone, Joes and Joannes alike were covered in sweat.  Rumor has it that this class can burn up to 1000 calories in one hour.  I’d have to say there is some truth in that.   Before leaving the lady in the matching attire introduced herself as Maria.  She actually lives a few blocks from me (in fact everyone in my town lives only a few blocks away  -its that small).  She said that I just had to come to the next class on Thursday.  With enthusiasm like that how could I not?

Anyways, it was cool to get out and actually talk to people in person rather than on the phone.   It felt great and even two days later I still feel somewhat exhilarated which has definitely taken the edge off a crazy week at work.  While I won’t be donning a Brazilian flag sports bra (or any flag accented sports bra for that matter) any time soon, I’ve spent so much time on the treadmill that I’ve forgotten how fun a class can be.   Healthy too!

10 thoughts on “Fun With Zumba”