Last weekend I decided to take the gift card that Hubby had given me for Christmas down to the local nail shop to get a pedicure.  This nail shop had expanded to now include massage, facials, permanent makeup, etc…  There was a wait for a pedicure so I decided to get a massage as they were half price.  A male therapist lead me down a hallway into a small dimly lit room.  At first I was wondering what it was that I had gotten myself into.  A nightlight plugged into the outlet was the only light.  The therapist also didn’t speak much English.  He held up a terry cloth wrap which looked more like a towel with velcro that fastens under the arms.  He gave me instructions on what to do with it but where I couldn’t completely understand him I thought for a split second that he wanted me to change behind it while he held it up.   He left the room and I stripped down to my undies, and then fastened the wrap around myself.  The massage itself was good and he was professional.  Although at one point while I lay supine, he had lifted my arms up to stretch them when, how shall I say this?  The Twins popped out from under the wrap.  I didn’t notice this right away but apparently he did.  Just as I looked up in horror, he also was laying a towel across my chest.  Oh my, was it good for you? 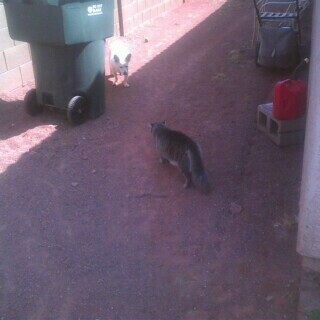 The cat is back to terrorize Abby.  This time kitty no longer sits on the fence and taunts Abby.  She had gotten so brazen as to slink into the backyard and sit while Abby watches warily from a distance.

Hubby finally had to pick the cat up and place her back in the neighbor’s yard.  She and Abby were engaged in the longest staring contest in history.  Abby didn’t act all tough until Hubby picked kitty up.

Abby is the recipient of a new doggie door.  We installed it last weekend and within a few days Abby got the hang of it.  The flap is a few inches off the ground so there are no worries that the Weasely One will sneak out through out.  Not that she could see it anyway, bless her.

Early this week I was awoken by what sounded like a knock.  I was actually dreaming that Hubby and me were in a hotel near the ocean and someone was knocking on the door.  Upon opening my eyes I heard a cat screech and knock something over in the yard.  Most likely a rake.  My heart was pounding in my chest.  I sat very still and listened.  There was nothing else.  At night we keep the flap of the doggie door closed.  I was unsure if what I heard was Abby trying to get out or the cat trying to get in.  Hubby is convinced that Abby wouldn’t let a cat come through, however, if the cat can come into the yard without Abby raising cain then I’m not convinced myself that a cat wouldn’t enter the house while I’m at work.  Time will tell.  Luckily the Weasel stays locked in the bedroom.

Have a nice weekend.