While not much has shown up in the media about the floating plastic island that expands from Hawaii to Japan, I wanted to post about it to spread awareness.  I first read about this a few years back while in a doctor’s waiting room.  It was quite impressive but not in a positive way.

This island was first discovered in 1997 by an American Oceanographer named Charles Moore while on his way home to Los Angeles from a yacht race  to Hawaii.  He was astounded by the astronomical amount of plastic debris floating for what seemed like mile upon endless mile in an area known as The  North Pacific Gyre.   In this ‘plastic island’ included plastic pellets, patio furniture, children’s toys to medical syringes and toothbrushes.  The island, which is more of a debris field, is not visible from space.  Size estimates of this debris field are about 270,00o square miles.

Where Did It Come From?

One site suggests that 20% of the plastics come from ships, including cruise liners, and the remaining 80% is from land-based sources.  The ocean currents allow for the plastics to be swept up into the North Pacific Gyre.  It takes on average 6 years for floating garbage to reach this area of the Pacific from the western United States and a year or less from eastern Asia.  Some of these plastics are over 60 years old and are not made of biodegradable materials so could be left floating for many years to come. 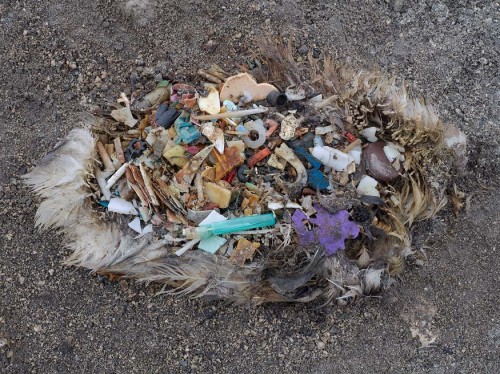 In addition to sea and bird life being killed by mistaking plastics for food as seen in the albatross to the left, these plastics break down due to photodegradation.  They still remain a polymer and are ingested by plankton, therefore affecting the entire oceanic food chain and becoming more concentrated which ultimately leads to humans ingesting plastics from the fish that are consumed.  Now there’s some food for thought.

When ingested by animals, the endocrine system often mistakes the chemicals in the plastics as estradiol, which can cause a hormone disorder.  Other dangers to animals are a disruption to the ecosystem of an area when certain species of sea life attach themselves to plastics and then are floated to another area of the ocean that they are not indigenous to.

So far 267 different species of sea life has been affected.

A company in The Netherlands has planned to recycle the 97 tons of plastic into a real live island which would hold enough room for a million people.  The architectural firm WHIM’s Ramon Noester, said it would take many years to transform this virtual garbage dump into a residential area.  The firm will also have to ascertain how to best collect the plastic so that it doesn’t continue to affect the sea life.

Another firm, The Environmental Cleanup Coalition (gyrecleanup.org), is using a device called the P-Pod to help clean up the waters while minimizing the risk to sea life. 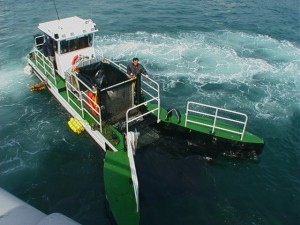 Ocean Sweeper boats are also used to help clean up the waters of the North Pacific Gyre.  However, the problem really begins with the plastics we use.  If measures are not taken to reduce the amount of plastics in our day-to-day living, then the problem will perpetuate despite the best efforts to clean the seas.

The Environmental Cleanup Coalition has produced the following list as a reminder in how we can all be instrumental in saving not just our oceans but our whole planet:

For More Info and Resources

19 thoughts on “The Great Plastic Island of the Pacific”