So last Friday I arrived at the gym at 5am to see that neither Athletica or Brian (the trainer)’s wife were there.  I was the sole candidate for early morning torture and Brian let me know I was in for it.  Where the heck was Athletica, I’m thinking.  I pictured her sound asleep in her warm bed, with her little chihuahua dog curled up next to her.  I was tempted to call her, laugh maniacally, and then hang up.  That will teach her to leave me on a killer solo workout.

I will be honest.  This has been quite far the toughest workout I have ever done.  Slowly though, I’m starting to see some small changes, mainly in my arms.  Of course no one is exactly asking me for directions to the gun show yet but hey, that’s not why I’m doing this.  I am sore.  Each day something different hurts but it is a good kind of sore.  The other night I had no difficulty opening a jar of olives without the former other half’s help (now about that parallel parking thing. . .just kidding.  I grew up in a city so its second nature).

Just to give an idea of some of the exercises, one of the sets involves flipping a tractor tire up and back the length of the gym.  Here is a picture that shows the tractor with said tire.  It is the bigger tire, and man was that hard!

The true test will be how my endurance is for running.  There is a run coming up on 3/10 that I’ve started training for.  It looks like my trainer is going as well.  Athletica and a few other people from the gym are doing that one race, too.  Monday morning we did lunges, squats and push ups (no girl push ups allowed, ugh).  In between we sprinted on the treadmill for 2 minute intervals.  The cool thing about all this is that I know I would never have pushed myself as hard as Brian pushes us.  When I looked down at the treadmill speed and realized how fast I was actually running I thought, wow, I can do this.  I can really do this!

Running really is mind over matter at times.  I think that sometimes in a race I will stop myself and just start to walk when I know I could really be running.

Brian has this special scale he uses which measures body fat, bone density and dehydration.  You basically stand on it like any other scale and then you hold onto these two handles that come up out of the scale.  This was rather an interesting tool.  Here I am thinking I am in such good shape and then I got a harsh dose of reality.  Although I’ve lost 45 lbs in the past couple of years, the scale showed my body fat being much higher than I thought.  My body also thinks it’s 68 years old (I’m 43).  Hmm.  I wondered how accurate it was.  Athletica stepped on and although she is in her mid-50s, her body shows as being that of a 28-year-old (hence why I call her Athletica).  So…I guess I have some work to still do.  At least my bone density is good and I’m not showing a lot of fat around my organs, which is important.  I can only imagine what the scale would have said if I were still 45lbs heavier.  Yikes!

The scale here is similar to the one Brian uses but the handles are on the sides. 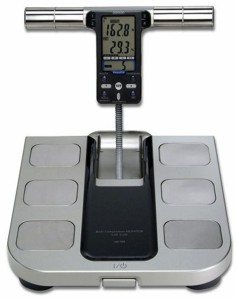 In addition to this new workout regime, I started a new eating plan that was provided with the gym membership.  It is sooo much food!  Yesterday was the first day and I wondered to myself if this was correct.  My boss is a fitness guru so I asked him about it today and he said that sounded about right.  There are five meals a day which contain carbohydrates, proteins and fats.  Certain fruits and veggies are counted as carbohydrates, as well as some dairy, too.  This is all very interesting.  I’ll be curious to see what the results will  yield.

12 thoughts on “More Tales from The Gym (& a Mysterious Scale)”