While coming out from work one evening I spotted this little plant growing in a moving stream.  I stopped and observed this from several different angles.

Water is moving quickly over it yet somehow it grew up through the rock it is rooted to and managed to sprout despite the water moving turbulently around it.  Now I’m no scientist when it comes to aquatic plant species but this little plant continues to baffle me every time I walk by.  Despite the seeming odds, it continues to grow and does not waver considering all that is going on around it.

It sort of reminds me of life.  No matter how harsh the conditions or what comes our way, with the right amount of tenacity we can stand up straight.  We can grow.

I actually took this picture last week.  I wanted to include this in a blog post but wanted it to make sense and not come off as too sappy.  Sometimes in nature there are signs of perseverance.  For me, when I see this little plant growing with all that rushing water around it, I breathe a sigh of relief.

It gives me hope.

On my way to the gym this morning I thought of just driving past and heading up to Sedona to catch the sunrise.  I’d call in sick for work, have breakfast somewhere, take in a hike and then be home in the afternoon, just in time to take a nap.  I abandoned that thought quickly and exited at the proper location.

Its been quite impressive to see how many folks are now going to the 5am class.  It makes it more fun, too.  One of the exercise we did this morning was using the TRX Bands.  You basically stick your feet in these loops and hold yourself in plank position.  It was really hard at first but by the end I was able to at least stay up on my forearms.  This has been an off week for exercise.  Actually, its been an off week all around.

Here is the picture of what that particular exercise looks like:

Sometimes I feel like I’ve reverted back to that 4th grade girl in Miss Jean’s School of Dance when I’m being shown how to do something correctly.  I am not the most coordinated of people.  While that middle-aged red-haired witch from childhood was very much into berating one for their shortcomings, Brian, my trainer, never berates.  He is very encouraging.  I’m not sure why I keep thinking of Miss Jean or her sharp British accent while at the gym.  It’s interesting how certain things will trigger memories, and not always good ones.

Brian pretty much had the whole gym sign up for a 5K this weekend.  In addition to being a great trainer, he is really great at getting people motivated.  There are a few people in some of the classes that have never done one. Even though they said they would probably just walk, the cool thing is that they are willing to go out there and do it.  I like the feeling of being part of that kind of a team. 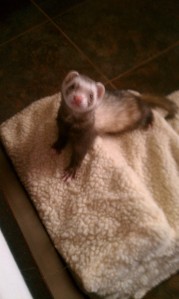 Here is Smokes with her new ferret stairs.  I’ve very often gotten tired of being the human escalator at 3am so decided to get her this little fake wool lined set of steps so she can easily get up onto the bed.  She has mastered getting up but so far has had some issues in figuring out how to get back down.  Nothing like waking in the middle of the night with a ferret standing on your head.    The stairs will be short-lived though.  I was just about to climb into bed last night when I noticed she had left a present on my pillow.  Thank goodness I noticed before climbing into bed and resting my head on said pillow.  Ugh!

Abby seems to be a bit like her old self.  I haven’t noticed too much evidence as of late that she has been sleeping on the couch rather than her own bed.  One Saturday morning not too long ago, as I lay in bed sipping my coffee, Abby appeared in the doorway wagging her tail warily, as if to say, may I come in?  I glanced at her with her seal pup eyes and her pinned back ears, and then patted the bed next to me.  In two strides and a jump she had settled in next to me with her head on my tummy.  I told her I was sorry for being mad at her.  She peered up at me with those soft brown eyes as if to say, it’s okay Mom, I understand.  Indeed, she did.

Ana is coming up for two weeks this month.  I’m not sure of the dates yet but I will be happy to have the company.  The ex was over cleaning out some of his things from the guest bedroom last week.  My dirty laundry is also kept in a hamper in that room.  He yelled out that I really needed to wash my gym clothes.  I yelled back that what he was smelling was the sweet smell of determination.  The hamper will also be relocated to the laundry  room before Ana arrives.  Something tells me she won’t exactly be in agreement with that statement.

Last Saturday was the supposed day of beauty.  I didn’t feel quite as satisfied as I usually do when leaving the salon.  While I know this is silly, my hair had been waist length.  It is still long (half way down my back) but having that much cut off (although it needed it) left me feeling naked or something.  I don’t know.  There’s been enough changes as of late and I just wasn’t ready to part with that much hair as strange as it may sound.

I had dinner with a girlfriend last night.  I almost canceled because I was not in a good mood.  Lately I’ve made a lot of mistakes at work and although I tried to think of everything that has gone right, I still beat myself up over it.  My friend asked me how I was doing with everything going on and I lost it.  She, in turn, started to cry, too.   And I think, damn, I just want to be happy!  I’m so tired of feeling this way.  I want to be laughing with my friends –not crying.  She suggested I go to counseling but the gym has really been my counselor.  I can take out all my anger and frustrations there.  We hit a punching bag this morning and when I took my gloves off my hands were bleeding.  I managed to split the skin on both hands between my pinkies, ring fingers and middle fingers.  Surprisingly enough they don’t hurt right now.  They’re just a bit red.  What a way to take out frustrations.

Anyway, the week is just about over.  I’m always grateful for that.  Its like reaching Friday is another accomplishment.  One more work week down.