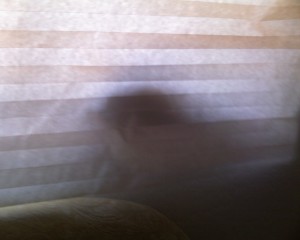 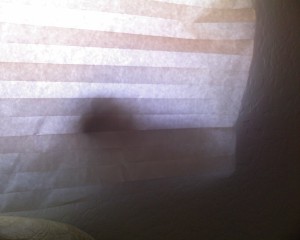 "Maybe if I stay very very still no one will know I'm here.  Heck, who am I kidding?  I'm a weasel!"

"How about some breakfast, Toots?" 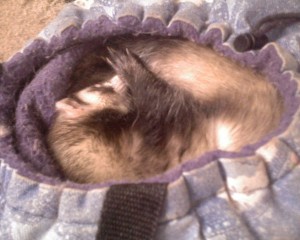 Here's my little munchkin, Monsoon, curled up in her sleep sack.

Although sleeping seems to be priority numero uno these days, she's gotten a bit fiesty in her old age.

She's had me wrapped around her little paw since day 1.  Sometimes I'll be hanging out in the Girl-Cave just watching tv on the fainting sofa when she decides she must be up there too.  Although she is quite capable of getting her little fuzzy butt up there herself, she's decided that its much more fun to have Mom do it for her.

Despite my encouragement of "Come on!  You can do it!"  she gives me this look as if to say "I'm too little. . .oh, this is so hard!  Can't you help me?  I'm almost seven years old you know!"  Yes, she's got me under her paw.  I lift her up and scratch under her chin.  She closes her eyes to half mast and wraps one little paw around my forefinger.

The 'can't get up on the fainting sofa' bit is all an act.  While I get ready for work in the bathroom I will suddenly hear some serious scratching sounds coming from the aforementioned fainting sofa.  She is digging so furiously into the back of the cushion that she doesn't notice me approaching.  I remove her from the sofa, give her a stern 'No' and return to the bathroom.  You see, its just a game.  Two seconds later she is at it again.  Don't know what she thinks is down there.  Weasel Wonderland?  This goes on for several more times until finally I learn to say nothing while removing her.  This apparently takes the fun out of it if you are not yelled at.  Oddly enough I learned this trick while watching that show with the British nannies who subject themselves to young American hellions.  Who would have thunk that it works on ferrets, too.

I often come home to see her asleep in the wierdest positions in her ferret condo.  Hind legs are flat on the floor, then her back is twisted so she is bent completely in half, and her front half is facing up with her paws standing straight in the air.  Not sure how she does it.  If she were X-rayed this is what I'm sure they'd find inside:

We arrived home last night from a wonderful trip.  It seems like we have been gone forever.  It was nice to feel that Phoenix heat after experiencing cold rain for most of the time we were gone.  Skagway was especially cold.  Ruben and I bought winter hats while there.  Funny enough Skagway in the Tlingit language aptly means 'place of the north wind.'

Luckily I took today off.  I was going to get some laundry started but my luggage has yet to arrive.  It somehow never made it onto our flight, yet everyone else we were travelling with got theirs.  I'm a bit nervous but the baggage claim people told me it was just delayed and not lost when I inquired about it this morning.

I feel a little out of it this morning.  My body is still rocking to the waves of the ship although I am sitting here now in the desert.  I didn't drink nearly enough water so I can really feel it.  I'll be slamming it today.

It was nice to see the girls when we got home.  I don't think Abby really cared that we were gone.  I expected her to be maniacally jumping all over Ruben when he walked in but she just wagged her tail a bit and that was it.  Monsoon was asleep in her sleeping bag when I picked her up.  She cuddled up close and licked my face.  She and I have a bond that Ruben will never understand.  I placed her on the bed and she did the happy weasel war dance before dive bombing behind the pillows.  My niece said that was the most she saw her move over the past week and a half.  I said 'that's because shes happy.'  I don't think poor Monsoon got out much over the last week.

I actually looked forward to coming home.  For many years I would be extremely depressed when thinking about coming home from a vacation.  Looking back now I don't think I was a very happy person.  I don't think I realized when I was younger that I had so much control in creating a life that would make me happy.  It's nice to want to come home.